A hymn to nature and a lyrical manifest which explores new partnerships between jazz, classical music and poetry: This unique session of sheer beauty remains an outstanding testament of the late New York composer and trumpet player.

Alongside its history jazz has been a close partner with poetry in many ways. The enthusiasm of jazz musicians for Eastern culture and philosophy which started in the 1960s was accompanied by different forms of inspirations. One of the most astonishing experiments with the lyrical thinking of the Far East happened in 1974 when composer Don Ellis made one of his dreams come true on the MPS label, combining big band orchestration with Japanese Haikus.

It sounds very adventurous: Establishing a connection between the very minimalist, nature-inspired poetry form of strictly seventeen syllables on the one side and arrangements for a jazz ensemble of seven (including guitarist Larry Carlton and bass player Ray Brown) and fifteen string players on the other. Ellis had a wide spectrum of activities in classical music: National Symphony Orchestra of Washington, trumpet soloist under Leonard Bernstein with the New York Philharmonic, soundtracker for the movie “French Connection”. Paralleling those were his big band experiences with Woody Herman and Maynard Ferguson and playing with the likes of Charles Mingus. Thus he could fulfill the demands of this task like few of his colleagues. He always loved to find new ways of blending jazz, rock, world music, and expanded the big band sound of his own “Tears Of Joy” orchestra by adding new colours to the symphonic side of jazz in 1971.

Two years later all of his explorations culminated in the now re-issued „Haiku“, tragically marking the creative zenith of a musician who was already suffering from difficult heart conditions. It is a record which illustrates eight Haikus in a lush orchestration and hymn-like mood as well as a formerly unknown manner of setting poetry to music. You could call it a journey through the seasons, starting with the melting of snow, witnessing the blossoming of trees, storm, summer rain, autumn and a starry night.

”Children” comes as a joyful, almost folky fanfare, a signal for the beginning of spring in 7/8. This is followed by “Blossoming” with a dreamy trumpet melody and the opulence of rising strings, while “Water Jewel” shines like a sound mantra with glass-like percussion and celesta but without metric boundaries. “Cherry Petals” comes as a bit of a dodecaphonic contrast with inspiration from Alban Berg, mirroring the winds carrying the blossoms away. The mood is then calmed down by the cool “Forest” duo of trumpet and harp, leading into the fast forward galloping “Summer Rain”. The nostalgic tableau of “Two Autumns” forms a beautiful pair with the singing cello in the “Mirror-Pond Of Stars”. The bluesy “Parting” is graced by Ray Browns walking bass and the use of violin glissando produces a thrilling effect, while the return of the sunlight in “Dew” is reflected in shimmering, Ravel-like sound cascades of the whole ensemble. The lyrical beauty of this record is beyond compare to the present day. 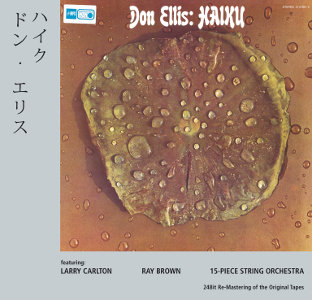