View basket “Don Ellis – Haiku” has been added to your basket.

This early masterpiece shows Duke’s new creativity on an arsenal of keyboards, reveals his first experiments with synthesizers and, on top of that, introduces him as a singer – an exciting document of his funky fusion work.
“Faces In Reflection” is a landmark in many ways and an early testimony of stepping out into a new chapter of George Duke’s career. He spent the first half of the 1970s in the bands of Cannonball Adderley and Frank Zappa. Both of them inspired the young Californian keyboarder to explore freer and more experimental forms, arousing his interest for a fusion sound. Especially his artistic relationship with Zappa is clearly reflected here, since it was him who encouraged his piano man to tackle with the sound of synthesizers. Duke displayed his attempts with the ARP here for the first time, besides playing an arsenal of other keyboard instruments (he had become a master of in the early 70s), like the Wurlitzer, Fender Rhodes and clavinet. Bearing in mind that at that point of jazz and pop history people like Chick Corea, Jan Hammer and Stevie Wonder all developed their virtuosity on the synth, this album is also document of a vibrant period musical history.
But this is not the only premiere we witness on “Faces In Reflection”. It also introduces George Duke as a singer. He had just quit playing trombone on record and thus found an even more direct way to communicate with his “voice” – which he did not only by scatting but also singing wonderful lyrics with his soulful timbre.
Listened to in a track-by-track manner you get the feeling of varied moods: There is the explosive, free-minded, almost chaotic “Opening”, followed by a mellow, soulful “Capricorn” from the Adderley repertoire. Two impressionistic solo intermezzi lead us to the outstanding “Psychocomatic Dung” with funky wizardry on ARP, Rhodes and clavinet and a brilliant interplay with drummer Leon Ndugu Chancler and bassist John Heard, smoothly leading into the title track with almost haunting synth lines. The second set shows Duke’s love affair with Brazil, as he delivers a stunning interpretation of a Milton Nascimento classic at breakneck speed. Later “Da Somba” catches up with the fast and furious pace, also recurring to a Brazilian mood with its hints of baião rhythms and including a hot-headed solo by John Heard. As the most daring improvisational masterpiece, “North Beach” settles between the two Latin-tinged tracks. Closing the LP, Duke comes back to the title track in a vocal version, showing his aforementioned lyrical soul.
Thus, listened to as a whole, ”Faces In Reflection” leaves you with the impression of a homogenous work, clearly stating that Duke has eventually found his own voice and concept. Or like he stated himself: “This was the first LP that really said what I wanted to say.” 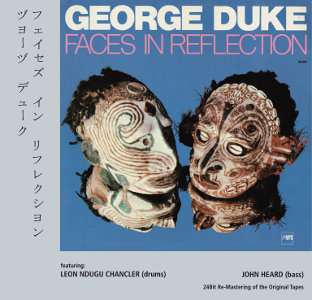 You're viewing: George Duke – Faces in Reflection 18,50 €
Add to basket