Furious rock frenzy and deep felt rhythm & blues from the unchallenged master of rock violin at the Berliner Jazztage, backed by a most prominent band including ex-Soft Machine drummer Robert Wyatt.
It seems a little bit strange that the violin is so rarely played in rock and jazz rock. Few musicians of the genre took it up, let alone took it to the big stage despite its ability to imitate the joy and pain of the human voice perhaps even more than the guitar. Actually there was only one man from Pasadena who did it with a breathtaking combination of passion and perfection. As critic Wolfgang Burde stated in the review of the concerts you can witness here, Don “Sugar Cane” Harris’ personality reflects shades of the country fiddler as well as the classical tradition of Paganini and Kreisler, but also dwells deep in rock and blues. No wonder, this concert was one of the definite highlights of the Berlin Jazz Days 1971. It catches Sugar Cane after he had taken various important steps on his career ladder: In the years before he had been a sideman for John Mayall, John Lee Hooker and Little Richard and eventually joined Zappa’s Mothers Of Invention in 1969. With the Mothers he gained attention from the rock audience, starting with his contributions on the album “Hot Rats”. Creating that big stir he was commissioned by the Jazztage to participate in not only one but two events, as protagonist of a band and as well as part of the “Violin Summit”. Recordings from both evenings can be heard here.
Again, as with so many MPS productions of the early 1970s, this is a tremendous documentary of a period in which every boundary-crossing between jazz, blues, progressive rock and vanguard not only seemed possible but really made sense. The team of the Berliner Jazztage did a daring and wonderful job in recruiting an all-star band especially for this event: You’ll find ex-Soft Machine drummer Robert Wyatt in the line-up alongside New Zealander Neville Whitehead who, as an excellent session bassist, also belonged to the Soft Machine sphere. Wolfgang Dauner once more shows his incredible versatility on keyboards, and the guitar work is shared by Volker Kriegel of the Dave Pike Set and Norwegian Terje Rypdal.
In the opener, the sheer power of the whole band will leave you jaw-dropped as they work themselves up into a steaming frenzy. After a heartbreaking intro the title track develops to a collective tightrope walk between the blues and the free, with Dauner breaking loose before a devilish cadence by Harris. “Song For My Father”, the only track taken from the “Violin Summit”, is a Horace Silver composition and unites bossa and blues with fulminant soli of each Harris and Rypdal. “Where’s My Sunshine” finally shows Sugar Cane as a soulful singer, creating an amazing dialogue between his voice and his strings. Every single one of these four killer tracks is a statement of his unbridled will to break free from restrictions of structure and time with his soulful and abundant improvisations.
The Hendrix comparison has been used so excessively in the last years it has become something of a curse. Then, 35 years ago, it hit the bull’s eye. Sugar Cane really was the “Jimi Hendrix” of the violin”. The exciting cover artwork tells the truth: This fiddle was a bloody marvel. 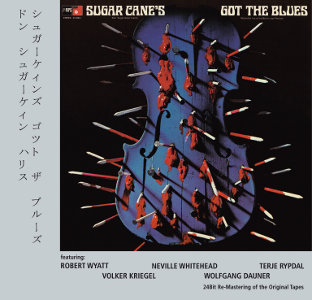