The sax player of “L’ascenseur pour l’échafaud” reveals a mastery of crossing free jazz, rock and blues, transforming material by the Beatles, Otis Redding and The Supremes with a highly energetic band featuring Joachim Kuehn.
Mention the name Barney Wilen and many people will associate it with “L’ascenseur pour l’échafaud”. Indeed, the man of French and American lineage (his real name was Bernard Jean Wilen) is the sax player in the legendary Miles Davis soundtrack. But aside from that popular collaboration, Wilen, who died in 1996, contributed to the history of jazz in many other ways.
Perhaps the most interesting chapter in Wilen’s recording career are the late 1960s, when he led a group called the Amazing Free Rock Band. In this band we can find a young Joachim Kuehn on keyboards and Aldo Romano on drums, as well as guitarist Mimi Lorenzini, bass player Guenter Lenz and Wolfgang Paap as the second drummer, adding the rhythm’n’blues-side to Romanos’s free perspective. Already expressed by the name of his band, Wilen and his team show their extraordinary capacity of a tightrope walk between jazz rock and free jazz, a very natural crossover at that time. As “Dear Prof. Leary” shows, the “free rock” he plays with his colleagues is full of tongue-in-cheek hints, picks up classics from pop and soul and always gets his grounding from the blues.
The LP starts with Lennon / McCartney’s “Fool on the Hill” with Wilen slipping into the skin of the fool with a slightly ironical touch, and Lorenzini alternately breaking out with crazy wah-wah effects. In the closing track, Otis Redding’s famous “Respect” riff is almost rendered in a non-chalant way and then gradually deconstructed on a high-energy level, including a unique, bluesy and at the same time free solo by Kuehn. In between those classic corner pillars Wilen’s quintet embarks on a journey which gets its driving force from the meeting of beat and jazz: The title track includes Kuehn’s wild organ escapades, duelled by Wilen’s tenor and based on a thumping groove, with an anarchic interplay of freaked out voices – greetings to Timothy! “Ode To Billie Joe” once again shows Kuehn’s bluesy vein, while “Dur Dur Dur” explodes with a rocky mood, gathering the whole band in one groove, causing the listener to remember Hendrix as soon as Lorenzini treats his guitar. But it is their version of the Motown hit “Why Do You Keep Me Hanging On” which underlines the rock-jazz encounter in the most striking way – as the beat part of the band plays the original material on the left channel and then getting the direct answer with Wilen and Kuehns’ contribution from the right. In contrast, Coleman’s “Lonely Woman” reflects a rather additive technique of beat drums and collective impro.
As J.E.Berendt states in his liner notes, jazz has always influenced the development of pop music. Wilen allowed himself to fetch back something – in a truly multi-faceted, amazing, free and rocking way. 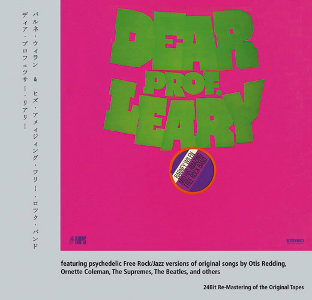