With these recordings we enter the realm of what has to be called one of the most daring experiences between jazz and rock to come out of Europe during the first half of the 1970s. P.C., of course, stands for Pierre Courbois, the Dutch drummer who in 1961 already established Free Jazz on European ground with his Original Dutch Free Jazz Group. At the end of the decade he founded his own quartet with Jasper van’t Hof (keyboard), Peter Krijnen (bass) and Toto Blanke (guitar) who had just given up his profession as an architect. Krijnen was soon replaced by Siggi Busch and after the recording of two LPs for MPS Joachim Kühn came in for van’t Hof. They heard flutist Jeremy Steig for the first time during the 1972 Jazz Now! festival in Munich and liked his trips on the flute very much. At that time Steig was already a successful recording artist for Verve and Blue Note, playing with Bill Evans and pioneering jazz rock in the States.
Once more it was Joachim Ernst Berendt who came up with the idea to bring Jeremy and the Association together in front of a live audience. As Courbois recalls the tour began in somewhat adventurous circumstances. Due to a late arrival of his plane Steig didn’t have a chance to rehearse the material with the band and so they took the stage without exactly knowing what was going to happen. But all of them being experienced in free jazz they made a virtue out of necessity – very much to Steig’s amazement who remarked that he couldn’t believe how it’s possible to swing like this without any obvious rhythm! The two sessions captured here took place in the Southern German city of Freiburg and Lausanne in the Swiss Romande.
Having finished the tour in the occident Association P.C. embarked for an All-Asian parcours that lead them from Teheran and Kabul to Delhi, Bangkok, Hongkong and Kyoto – as ambassadors of a sound which at that time was not undisputed amongst the more conservative jazz critics, but nevertheless rapidly gained cult status among the open-minded audience. Why did they create such a craze? Listening to that session you will immediately get it.
Siggi Busch’s introduction leads into a jumping and pumping groove, on which Toto Blanke and Pierre Courbois explore themselves in a free fancy way before Steig joins them on a blues rock pattern. Steig and Kühn’s Fender Rhodes then enjoy an almost lyrical intimacy. “Dr. Hofmann” is in a haunting and spine-chilling mood, preparing for the anarchic “Ecnelis” which indeed – as Courbois has confirmed – is a backwards played version of his piece “Silence”. It gives way for Steig’s moment of glory, a splendid solo on the bass flute. We leave it to you to discover the countless shades of “Lausanne” celebrating collective improvisation at its best.
Even Courbois can’t remember today why the LP was given the title “Mama Kuku” which, by the way, means “Mother Chicken” in Swahili. Make up your own theory about that – it just adds to the mystic flair of this amazing band. 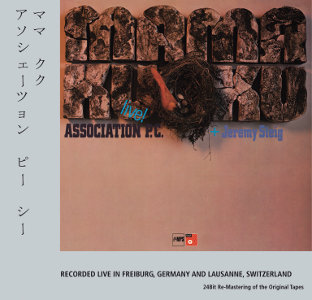