In 1990 German state owned station Radio Bremen recorded one of Jazz Passengers’ sophisticated live shows, which is now available for the first time in full length. This performance is regarded by Roy Nathanson as ‘our best concert in that period for sure’.

Hipness is over. When in 1987 Nathanson, Fowlkes, Ribot, and Rodriguez decided to no longer function as John Lurie’s backing band Lounge Lizards, they formed the Jazz Passengers. At this 1990 show they already had canned three studio albums, just enough to present a diversified touring programme.
From Zappa-esque originals ‘The Faker’ and ‘Peace In The Valley’ to the soft and sweet rendering of Duke’s don’t-call-us-we’ll-call-you-or-so and the warmhearted (at least before it explodes) interpretation of the jazz standard ‘Angel Eyes’, which some may be familiar with through Sting’s dreary version for the ‘Leaving Las Vegas’ soundtrack… It all is what Jazz should (let us say HAS TO) stand for. Okie dokie: we won’t regret it in case this shall be called “hip” again some time soon.

When you love Jazz, Vaudeville, Avant Garde, Guts, Heart and Soul – not just as added flavours, but as equal ingredients – you got it here all in one. Enjoy! 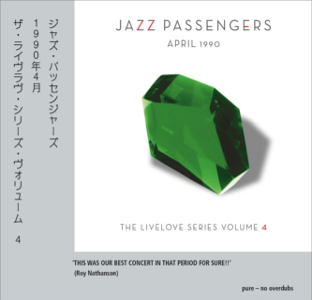