View basket “Working Week – May 1985 (livelove vol3)” has been added to your basket.

The third album of the legendary vibraphone player and his Set presents a deep insight into the gap-bridging wizardry from jazz improvisation to psychedelia to swinging humor.
Contemporary witnesses talk of a “little rebellion” when they remember the sound of the Dave Pike Set. Oddly enough the gentle eruption these four musicians evoked was first and foremost a European phenomenon. Dave Pike arrived in Germany in 1968 – at this point of his career he was experimenting with lots of different things. Embarking from his past as a young collaborator with Dexter Gordon, Carl Perkins and Paul Bley on the West Coast he later delved into the Latin scene and experienced a session with Herbie Hancock in New York. Disappointed with Atlantic not releasing his album “The Doors Of Perception” (featuring Lee Konitz) he crossed the Atlantic to meet more open minded listeners. And he succeeded: Teaming up with guitarist Volker Kriegel who had a distinctive love of playing the sitar, bass player Johann Anton Rettenbacher and drummer Peter Baumeister he created the Dave Pike Set who played an unheard mixture of straight jazz improvisation, funky soul covers and psychedelic hymns. As he has stated himself recently the band was influenced by the originality of The Beatles and the complex humor of Zappa alike. And like few others at the time began to bridge the gap between the academic jazz listener and the more popular orientated. Their work culminated in four MPS albums, “Live At The Philharmonie” being the only live document among them. It was recorded during the Berliner Jazztage 1969 where the discourse between progressive and traditional parties was raging high among audiences and critics. As German author Heinz Werner Wunderlich wrote in his original liner notes, Pike and his companions were the only group to remain unaffected of the fight. If you listen carefully to this extraordinary session you’ll know why: There is a blues-injected tongue-in-cheek number penned by Kriegel (“Riff For Rent”), as well as a flirt with Country & Western in “Mambo Jack The Scoffer”. You’ll find the perfume of India and Psychedelia in “The Secret Mystery Of Hensh” alongside a collective improvisation. Intricate cross-rhythms grace “Nobody’s Afraid Of Howard Monster” and the opening track “Hey Duke” pays homage to Ellington with daring excursions into the free. But as rhythmically complex and elaborated these compositions may be, they all appeal to the hips and are swinging as mad. This is the secret of the Dave Pike Set. 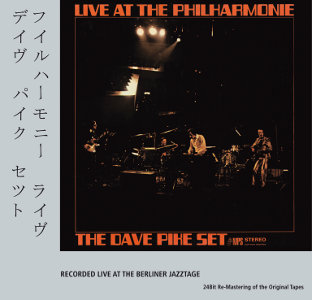 You're viewing: Dave Pike Set – Live at the Philharmonie 18,50 €
Add to basket